Investment in thermal imaging and drone technology is improving the monitoring of reintroduced mammals on AWC’s Faure Island Wildlife Sanctuary, a feral-free haven off the coast of Western Australia. 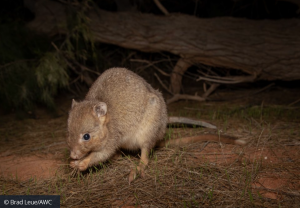 Faure’s population of the Burrowing Bettong (Boodie) is estimated to be around 20,000 animals, at least half the global population. AWC currently monitors populations of these species through regular spotlighting, trapping and track surveys.

Could technology could help overcome some of these issues? 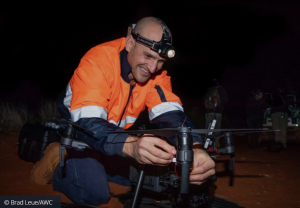 Using a DJI M210 Aircraft fitted with a FLIR XT2 dual thermal/RGB sensor, the team wanted to see if different species could be both detected and differentiated using thermal imagery.

They also wanted to see if the technology could enable a better understanding of the behaviour of some of the reintroduced species, specifically Burrowing Bettongs (Boodies).

AWC ecologists had long suspected that Boodies were introducing a bias to current population estimates by moving around; that they were possibly ‘following’ and ‘escorting’ the ecologists during spotlight surveys and therefore being counted more than once.

As suspected, the team found that Burrowing Bettongs tended to ‘investigate’ people as they walked through the bush, potentially biasing population estimates through double counting.

Preliminary results suggest the technology may be an effective tool for monitoring bandicoots; however, the limited resolution made it difficult to distinguish between Burrowing Bettongs and Banded Hare-wallabies, which are similarly sized macropods.

Initial estimates of population size from the drone footage were comparable to those generated from standard spotlight surveys, demonstrating that  the latter remains an effective method for generating population estimates. 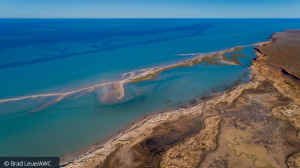 AWC acquired Faure Island in 1999, declaring it feral-free in 2002 and beginning a program of threatened mammal reintroductions. Today, Faure’s wild, self-sustaining mammals are vital source populations for reintroductions to the mainland, and critical for the future survival of each species.