Sign In Register
David and Goliath: How Small Retailers in Iceland are Taking on Amazon and Uber with Drone Delivery (Part 1 of 2)

In English, a paradigm shift or major new idea may be referred to as an “Aha” moment: so the name of this innovative urban delivery service is appropriate in multiple languages. At last month’s Commercial UAV Show in London,  we met Maron Kristofersson, CEO and Founder of Aha.is, a drone delivery service based in Iceland, and the accompanying UK-based software company that has developed a delivery operations solution.  Aha is allowing local players to compete with retail giants on delivery. (This is the first part of a two-part series on drones and robotics in an urban environment.) 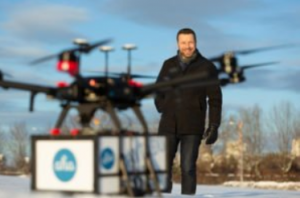 Robotics and automation, Kristofersson says, are critical to Iceland. “By way of background:  weather, costs and a tight labor market in Iceland drive us toward automation…  A combination of bad weather; very low unemployment; and high costs, including salaries,” contribute to the benefits and make the need for automated processes clear. So when a small group of entrepreneurs set out to make local Icelandic products available by delivery to the community at competitive prices, they looked to technology to make the idea viable. Aha is an open market delivery service: customers select from a wide variety of local participating restaurants or grocery stores on the website, place an order, and receive it at their doorsteps.  They offer a wider variety of items that can be delivered than a service like Deliveroo in the UK or UberEats in the U.S., and they allow smaller local businesses the same access to delivery services as the giants like Amazon.  And in some cases, they deliver by drone.

They did not start off with drones. “Initial deliveries were done using petrol cars,” explains Kristofersson, “but the high costs of maintenance drove us in 2015 toward electric cars… they are much lower maintenance and easier to operate.”  Now, Aha uses a combination of technologies to make deliveries – and drones are a major component.  Drones, says Kristofersson, are “Environmentally friendly and cheaper”  than traditional methods – and, he comments, despite concerns over the noise that drones create, “They are significantly quieter than cars and motorcycles.” “We are now working on our 7th generation – and we deliver direct to backyards and public points,” says Kristofersson.  “The goal is to make delivery greatly simplified for operators, with seamless integration between delivery nodes.”

“We’re still at the beginning of the curve,” says Kristofersson. “Our goal is at least 50% of deliveries by drone.”

In Rekjavik, Aha works elegantly and effectively.  But in the future of scaled automated urban delivery, drones aren’t the only robotic systems in the process.  Part of the distribution channel includes picking and packing using “robots that work immediately on order around the clock to get the product from the warehouse or store to the door,” Kristofersson explains.  This robot fleet includes indoor robots that handle from store door to outdoor delivery mode; and delivery robots that are move into streets when needed.