Sign In Register
Dept for Transport: Extra powers to prevent the misuse of drones 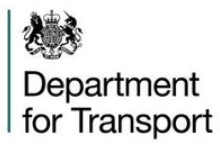 Consultation on the safe use and effective regulation of drones.

The government is to consult on new measures to prevent the misuse of drones, including on-the-spot fines and the ability to seize them if necessary.

The new measures are intended to ensure drones are being used safely in a market set to grow rapidly over the next decade.

Drones have the potential to bring great benefits to the UK, and with the industry predicted by PwC to be worth £42 billion to the UK by 2030, creating a blueprint for safe and secure use now is crucial to prepare for the future.

The measures in the consultation launched today (26 July 2018) are part of a wider programme of new drone legislation and will shape the content of a draft Drones Bill due to be published later this year.

Drones present exciting benefits to our society and our economy, but with a small group of people choosing to use them for harm there are challenges we must overcome if we are to prevent them hindering the potential of this technology.

That’s why we’ve already introduced safety measures like a height limit, and rules around airports, and today we are consulting on how we go further, including extra police powers and a minimum age requirement.

Drones are already being used for a myriad of exciting applications from inspecting national infrastructure like railways and power stations, to aiding disaster relief by speeding up the delivery of blood.

The industry has the potential to be worth billions to the UK economy so it is vital that it develops with a strong framework to encourage innovation and growth while keeping people safe.

The police and security personnel already have powers to address the misuse of drones, but these new proposals will reinforce the importance of complying with drone safety rules, and create a tailored toolkit to ensure they are observed.

The proposals are part of a package of work from the government to ensure drones are flown safely as they become used more frequently.

On Monday (30 July 2018) updates to the Air Navigation Order also come into force – implementing new height and airport boundary restrictions. Those breaching these restrictions will face penalties of up to £2,500 and could also be charged with recklessly or negligently acting in a manner likely to endanger an aircraft or any person in an aircraft, which can carry a penalty of up to 5 years imprisonment.

Drones form part of the government’s Future of mobility grand challenge and are currently being used for a broad range of purposes across different industry sectors including:

2 comments on “Dept for Transport: Extra powers to prevent the misuse of drones”