Sign In Register
Drone designed to search for Avalanche Victims

Spotted: Each year, avalanches kill around 150 people worldwide. In 2015, four German powder enthusiasts and engineers got tired of waiting for someone else to come up with a solution and founded their company, Bluebird Mountain. After years of research, the company has now developed a specialised drone that can help with the search for avalanche victims.

Most avalanche deaths are not caused by the force of the avalanche, but from suffocation after being buried by the snow. It is often possible to breathe under the snow for a short period, which makes speed important when mounting a successful rescue. Bluebird’s PowderBee drone weighs just 600 grams and can be carried in a backpack and launched with the push of a single button. The drone will then autonomously search for signals from the victim’s avalanche beacon.

PowderBee’s design is optimised for harsh alpine conditions. It can operate in strong winds and freezing cold and can maintain a constant height over uneven ground. When PowderBee detects a signal, it will automatically land within 5 metres of the victim and from there, rescuers can begin to dig. Powder Bee’s bright yellow colour makes it easy to locate. 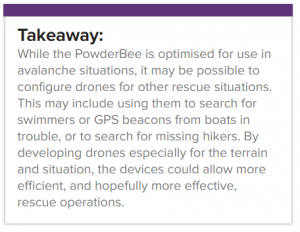 According to Bluebird, the PowderBee essentially acts as another searcher, allowing the group time to organise a more efficient rescue operation. It can also move much faster over avalanche debris than a person. The company has won several awards for its product and is currently looking for additional funding.

Innovative technology is working to make a number of sports safer — or at least to create more efficient rescue operations. Recent innovations in this space highlighted by Springwise include a remote control lifesaving buoy and a backpack that doubles as an avalanche airbag, which helps victims to ride to the top of the snowpack.