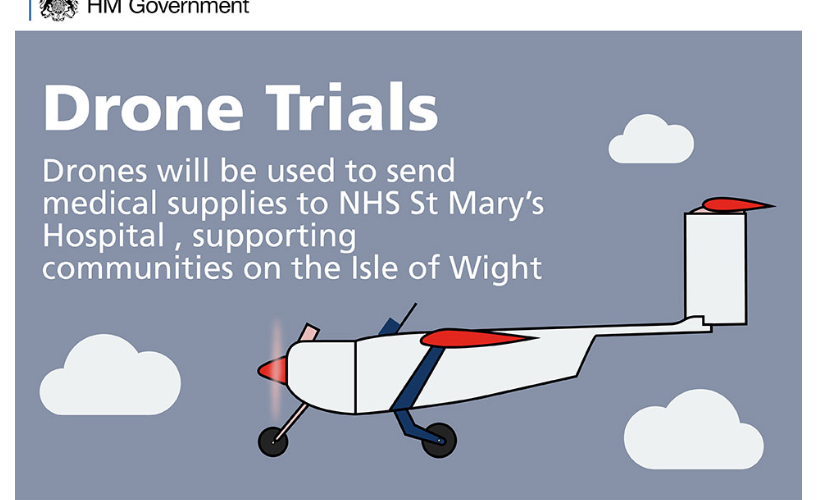 Yesterday during the Covid19 daily update, UK Secretary of State for Transport, Grant Shapps gave a speech on the work his Department are doing to support the UK during the pandemic.

In it he stated: “I have given the green light to trials of drones delivering medical supplies.

Earlier this year, we awarded £28 million to Southampton and Portsmouth to develop a Future Transport Zone.

As part of that initiative, £8 million was earmarked for testing drones, and how they might be used for delivering goods in the years and decades ahead.

Of course, now we have an urgent need, so we’re making use of that testing programme as part of our response to COVID-19.

As a result, I have fast-tracked trials to begin next week to carry medical supplies and equipment to St Mary’s Hospital, near Newport on the Isle of Wight.”

This builds on the Nesta Flying High Challenge, which looked at medical drone delivery between Southampton and the Isle of Wight, and which found the key benefits to this project to be:

The Isle of Wight is the second populous area, after Northern Ireland, not to have a fixed link to mainland Great Britain. The Solent is a barrier to people and goods, with relatively slow and expensive ferries providing the main connectivity.

This new drone delivery project, as part of the Future Transport Zone, will look to the future, while at the same time providing much needed medical supplies now. One of the great advantages at this current time is that drones will provide a disconnect between people, keeping those involved at much greater than social distances.

ARPAS-UK Members, Consortiq, are involved in this project, alongside the University of Southampton Transportation Research Group and Unmanned Systems Department, Windracers and DronePrep.