The EU’s reliance on the private sector to steer the development of defence technology is rooted in almost 15 years of drone research conducted as part of its leading R&D programmes.

Talks about European defence strategies are all over the place, in the media and on the political stage. Remarkably, the topic also spiced up the latest Spitzenkandidaten debatein Fiesole, on May 3. The buzzing is mainly due to the establishment of the European Defence Fund (EDF) (1), a €13 billion scheme which will run between 2021 and 2027, aimed at strengthening cooperation, joint investments and technological innovation in the field of defence and security. Also, in the run-up to the establishment of the EDF, the European Commission set up a Preparatory Action on Defence Research (PADR) for 2017-2019 and a European Defence Industrial Development Programme (EDIDP) for 2019-2020. Long story short: an awful lot has been going on.

Towards the EDF, on a drone

In June 2018, as the EDF started to take a distinct shape, the High Representative for Foreign Affairs and Security Policy and Vice-President of the Commission, Federica Mogherini, cheered the steps the EU took “over the past couple of years” in the areas of security and defence. Mogherini said that the latter just “seemed unthinkable before.”“We can now support research and cooperation to develop defence capabilities.”Still, it would be misleading to portray the latest EU R&D initiatives spurring defence capabilities as a bolt out of the blue. As a matter of fact, the European Commission has been supporting research to develop defence capabilities all along, since 2006. The point is that everything was swept under the carpet, or, if you prefer, on a drone.

Between 1998 and 2018, the EU contributed some 425 million euros in drone-research, under the umbrella of its multiannual framework programmes for Research and Technological Development (FP), co-financing projects of a total value of 644 million euros**. Figure 1 displays the evolution of funding that, during the different FPs, has been devoted to drone-research. Also, the graph depicts the total value of the projects that have been supported. 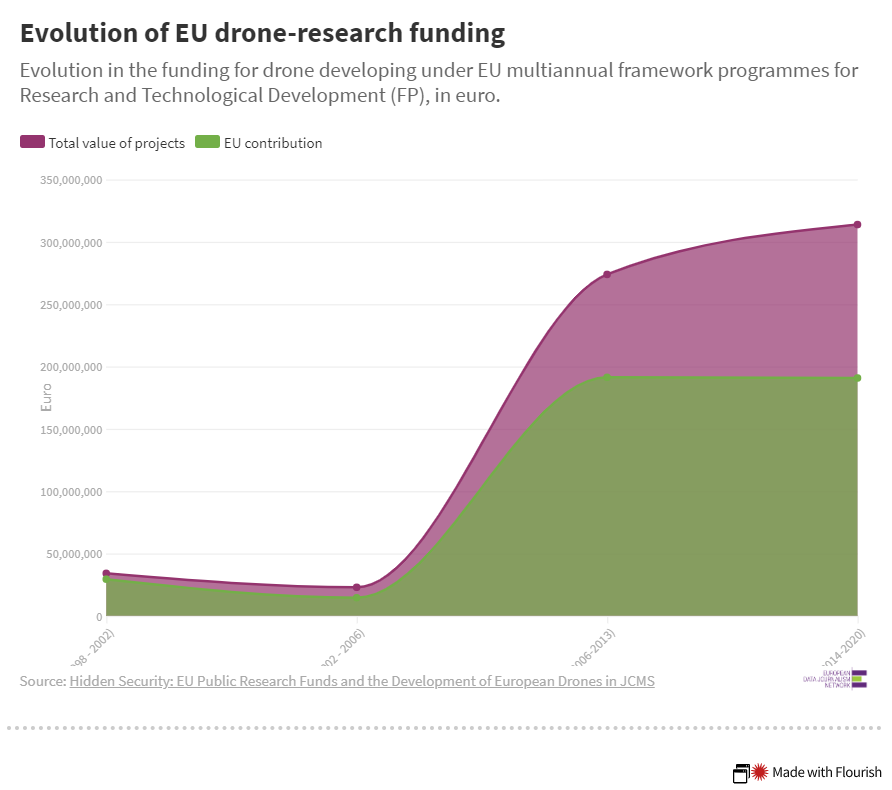 Of course, drone-related research projects can target several policy-domains, ranging from agriculture to healthcare, from environment to transportation. So why should this be a big deal? Well, one of the key applications, remains, undoubtedly, the possibility of being used in the field of security and defence – despite those applications are not specifically foreseen by such funding programme.

Figure 2 reflects once again the sudden increase in the overall amount of EU funding backing drone-research that occurred since 2006. But more than that, the stacked bar chart hints at the increasing variety of drone research projects that have been conducted over the past years: if in FP5, projects fell within two broad categories (“growth” and “information society technologies”), in Horizon2020, 10 different typologies of projects received considerable funding (i.e more than 5 million euros). 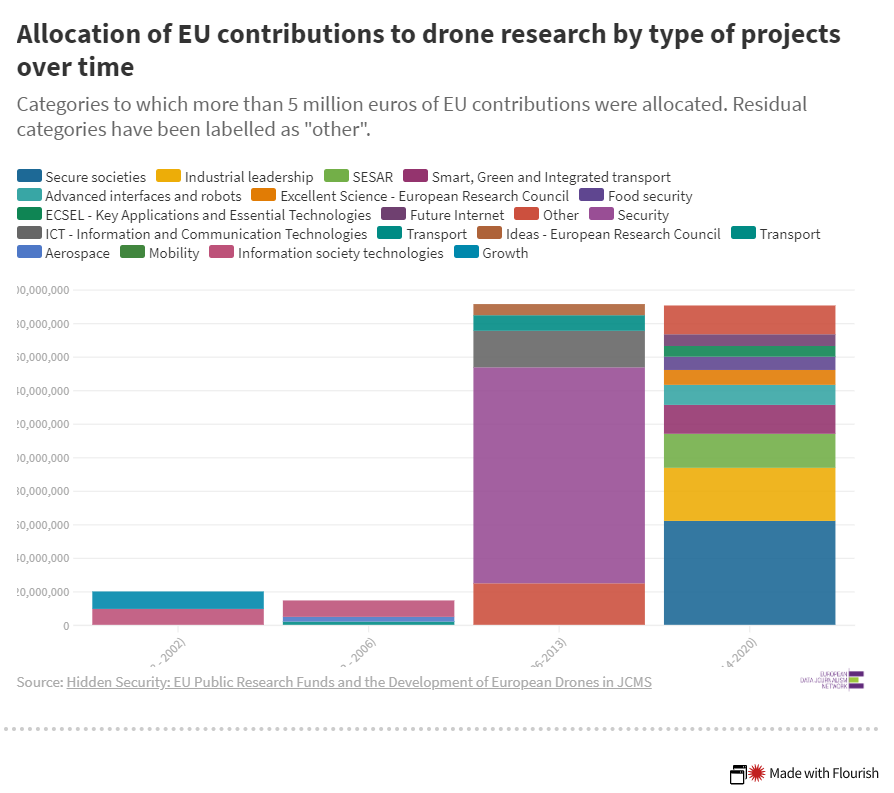 The crucial information to retain from the graph is that projects related to the topic of “security” (relabelled as “secure societies” in Horizon2020) feature the biggest “absorption rate”. In other terms, under the last two FPs, namely FP7 (2006-2013) and Horizon2020 (2014-2020) the EU has steered a relative majority of resources in favour of drone research in the field of security.

The funny thing is, however, that from a technical point of view, the EU is not allowed to finance defence research under its FPs. Actually, that is why the PADR, EDIDP and EDF were set up in the first place. Arguably, how could one otherwise make sense of Commissioner Elżbieta Bieńkowska’s triumphalist announcementconcerning the “novelty” of the EDF:“In order for Europe to protects its citizens, we need defence technology and equipment in sectors such as AI, drone technologies and satellite communication systems. Thanks to the investments we are planning today, we move from the level of ideas to practice and we reinforce our defence industry’s competitiveness.” But how has it been possible to spur massive investments in the sector already long before the recent shift than?

According to Bruno Oliveira Martins, senior researcher and coordinator of the security research group at the Peace Research Institute in Oslo (PRIO): “The justification for drone-research has not been, necessarily, in terms of spurring defence. The argument was rather that, by developing a number of technologies, it was possible to expand the general expertise in the field across Europe. There has always been this belief that drone-related research will lead to new commercial products for the civilian economy and, thus, benefit the economy at large”. Oliveira Martins mentions a “belief”. Yet, he exposes a, de-facto, hidden practice. In other terms, the official way around it all appears to be the definition of ‘dual-use technologies’, that is: know-how that canbe used for both, civilian and military purposes. However, if there was a plot, it couldn’t be weaker: “Eventually, the know-how developed under projects targeting dual-use applications will end up in the development of weapons”, Oliveira Martins explains.

The fragility of the “dual-use technology” argument appears all the more evident if we take a look at the companies that have been carrying out drone research under the FP7 and Horizon2020 so far. Under the umbrella of the FPs, drone research projects have been regularly conducted by cross-border public-private consortia, which can comprehend universities, public authorities, such as national armed services for instance, but also defence companies. Every project usually has a unique coordinator. 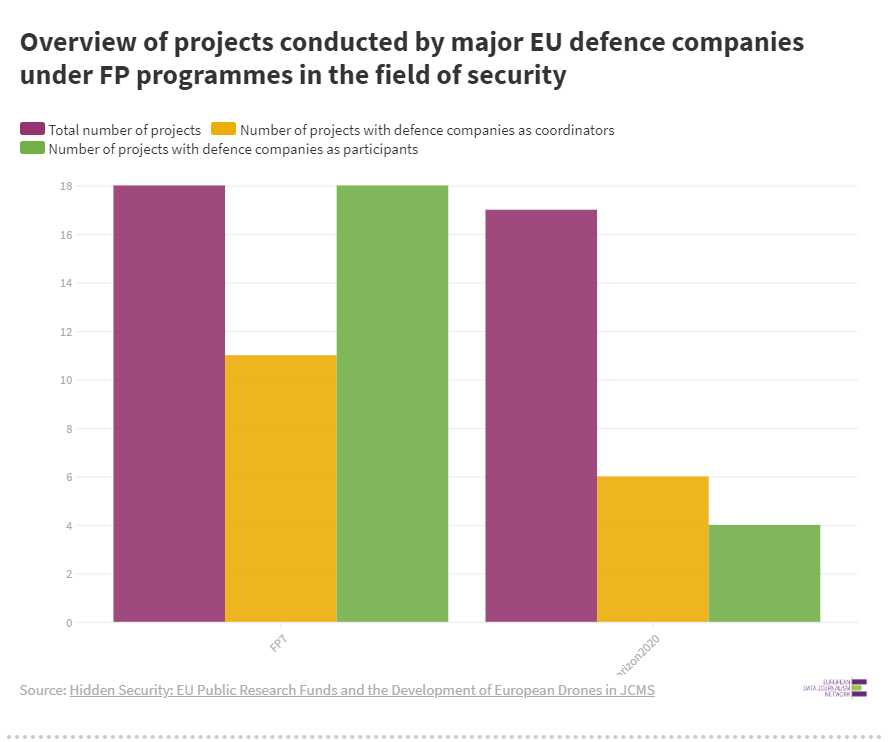 By specifically focusing on drone research projects falling under the ‘security’ and ‘secure societies’ labels in FP7 and Horizon2020, figure 3 shows how many projects have involved defence companies. Crucially, in FP7 all research project had at least a partner from the defence industry, the likes of Israel aerospace industries (the country’s major aerospace and aviation manufacturer, building, among other things, aerial systems for both military and civilian usage) or Airbus D&S, the latter defining itself “a global leader in the defence sector, the largest defence supplier in Europe, and among the top 10 defence companies worldwide”. Also, a majority of these companies were also involved in a coordinating role. Altogether, and only as far as security-related projects are concerned, more than 17 million euros passed directly into the pockets of these companies.

In a Parliamentary question dating back to 2015, Alyn Smith (The Greens/EFA), and Barbara Lochbihler (The Greens/EFA), suggested that “despite rules prohibiting EU research grants to fund military projects under Horizon 2020 or the Seventh Framework Programme schemes, the ‘dual use’ — civilian and military — of drone technologies allows defence companies to benefit from EU grants”. In 2016, in its answer to the question on behalf of the EC, Commissioner Avramopoulos wrote that “research and innovation activities carried out under H2020 shall have an exclusive focus on civil applications. Research motivated by military applications is excluded from funding by H2020.”

In the light of the data and numbers highlighted above, one cannot but raise an eyebrow at Avramopoulos’ statement. According to the German MP and member of the Parliamentary Assembly of the Council of Europe,Andrej Konstantin Hunko (Die Linke), “military drone research is a billion-dollar grave for taxpayers’ money and serves solely to subsidize the arms industry. Companies such as Airbus and Leonardo receive hundreds of millions of euros to develop products that they can market themselves.” But, eventually, why would the EU have an interest in subsidising the private defence industry?

Of course, it might well have been a game of lobbying. Indeed, in 2017, the Corporate European Observatory (CEO) exposed these dynamics, following Vredesactie’s report Securying profits: how the arms’ lobby is hijacking Europe’s defence policy. But these reports focus mostly on the recent path leading to the EDF and the GOP (Group of personalities) defining the EU’s future defence strategies. Therefore, from a historical perspective, the question remains why has the EU invested all of a sudden in drone research back in 2006?

According to Oliveira Martins we need to look at the bigger picture. Back in the early 00s, 9/11 changed the overall political priorities: “As a matter of fact,the discourse that the EU was a target of both, international terrorism and home-grown terrorism surged. The latter was accompanied by the idea that there was an urgent need to catch up with the state of the art in technology.”  This is arguably why the push for covered investments occurred and the dual-use discourse served as a justification. There might well have been cultural and political reasons behind this story also. But voluntarily or not, these ‘hidden practices’ channeled through EU funding and targeting drone research, should be considered the very first brick of what nowadays is publicly defined as the new era of European defence governance.

Thanks to your donation, 511 million Europeans have free access to this article.

(1) The data used in this article stem from Bruno Oliveira Martins’ and Christian Küsters’ academic article, Hidden Security: EU Public Research Funds and the Development of European Drones”, published in the Journal of Common Market Studies in August 2018. The authors have kindly shared the database of their article with EDJNet.

(2) The data referring to EU funds financing drone-research and, in particular to Horizon2020 funds, are updated as to January 1, 2018. Thus the size of investments in drone research might be higher than the one reported in this article.

Under the auspices of the European Defence Fund, such R&D funding is set to substantially increase, while potential bilateral programmes between EU states have been explored. The EU has also continued to lay the groundwork for closer EU military coordination and integration, such as the pooling and sharing of resources and intelligence, while strengthening the capacity of local forces abroad. Despite concerns raised by the European Parliament, the development of these policies and technologies has taken place without significant consideration of what the legal, ethical, and military-strategic impact of these instruments might be.

To discuss those topics, Chatham House and the PAX NGO are organising a conference on “EU Perspectives on Remote Warfare” in Brussels on 15 May. The purpose is to debate about “the implications of the new EU Defence Fund, legal, ethical, and transparency issues in military research and development, and the increasingly ambitious position of the EU as a global actor”. The participantw will be invited to “provide a factual overview of near-term developments that will help policymakers, experts, civil society organisations and politicians think critically about the EU’s foreign and security policies.”