ARPAS-UK Member, Plowman Craven is proud to have collaborated with BAM Nuttall and Network Rail on an innovative virtual reality project that showcases to rail users the extensive works taking place to upgrade the Aberdeen to Inverness line in Scotland. 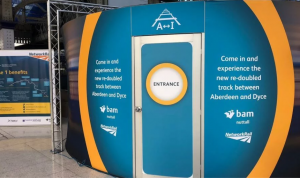 A bespoke six-metre cylindrical ‘cinema’ pod was then constructed at Aberdeen Station by Igloo Vision, enabling the public to enjoy a birds-eye-view of the extensive work being undertaken on the route and better understand the full extent of the project.

Matthew Spence, Network Rail’s Route Delivery Director for Scotland said: “It was fascinating to see this film as it highlights the railway enhancement in a new way, helping the public to understand the complex work that has taken place to build the second track from Aberdeen to Dyce. A big thanks goes to all who worked hard to complete this phase of the project and to the public for their patience and understanding throughout the construction.”

Plowman Craven has been involved on the wider Aberdeen-Inverness Improvement Project for some time, with the company’s Vogel R3D system providing principal contractor BAM Nuttall with high-accuracy sub-5mm survey data and information-rich 3D models for the River Don viaduct, as well as mapping for the Aberdeen to Dyce construction phase.

Vogel R3D is Plowman Craven’s industry-leading rail and infrastructure drone survey system that enables the comprehensive surveying and inspection of the complete rail environment, removing workers from the tracks and significantly reducing programme timeframes. Since its launch little over a year ago, Vogel R3D has safely completed more than 20 live projects, surveyed more than 1.5million m2 and flown a distance of more than 1,300km.

Click here to see what Vogel’s 100MP camera can produce…

Here’s another short video, showing some of the behind-the-scenes activity from site – including Vogel R3D taking off and landing with the 360 camera in place.