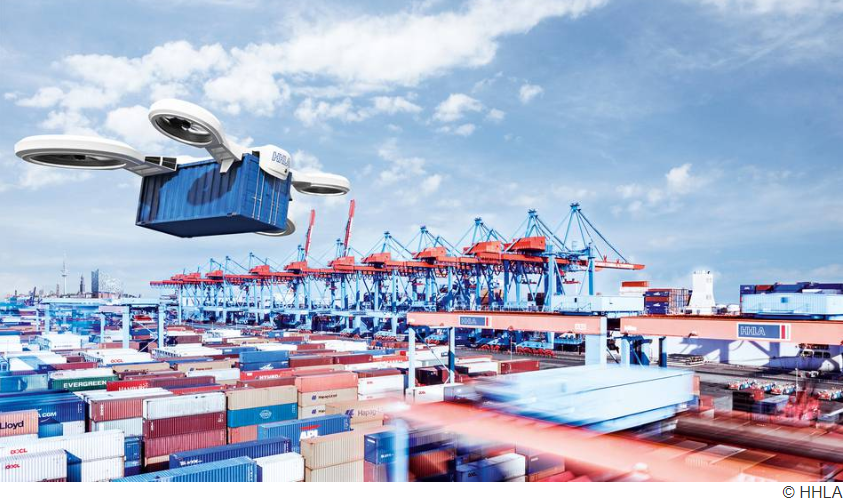 The Hamburger Hafen und Logistik AG (HHLA) and the Fraunhofer Center for Maritime Logistics are considering the use of drones to transport empty containers through the skies over the Port of Hamburg, Angela Titzrath, Chair of the Executive Board of HHLA announced Wednesday (March 27, 2018).

Of the reports read, none of the English translations highlight that this will be for empty containers only.

Large drones can already carry loads of up to two tons, said HHLA and confirmed a report by the daily Hamburger Abendblatt. HHLA had examined the technicalities with the Fraunhofer Center in Hamburg-Harburg. The economic feasibility will be assessed in the next step.

Meanwhile, the Hamburg TruckPilot project by HHLA and MAN truck is gaining momentum and testing the use of autonomous trucks. The first prototypes have recently been tested at the Altenwerder container terminal, Titzrath said. HHLA is driving digitalisation ahead in the port, she said, adding: “We will continuously invest in the quality and profitability of our core business and identify and drive forward new, especially digital growth areas, to this end.” The project is crucial to the city’s strategy in the run-up to the 28th ITS World Congress (Intelligent Transport Systems) which Hamburg is hosting from October 10-14, 2021.

HHLA is expecting a slight overall increase in container throughput in 2019 following the takeover of North America services and the first full-year consolidation of throughput volumes at the HHLA TK Estonia AS container terminal.