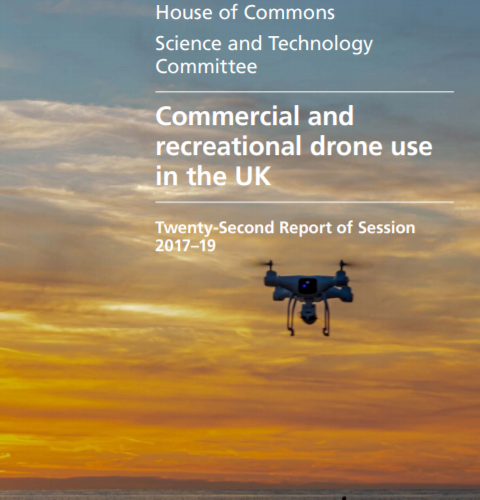 The Science and Technology Committee today publishes its Commercial and recreational drone use in the UK Report, which highlights the need for a vision for the future for drones in the UK, drawing on the opportunities and lessening risks presented by increased drone use.

During the inquiry, the Committee heard that the use of drones had many societal and economic benefits, and were currently being used in a number of different industries including:

A recent report from PwC predicted that by 2030, 628,000 people would be working in the drone industry in the UK, and that this would have a £42bn net positive impact on the economy. Amazon has already successfully trialled the use of drones to deliver goods in the UK in 2016, and witnesses told us that in 2020, drone taxis would be trialled in America for the first time.

The Committee also heard of the substantial risks to both safety and privacy that drones may pose as they are incorporated into our airspace.

The Committee also heard of a proposed registration scheme, that was generally welcomed, and online test for all drone users set to start in November of this year. The test is to ensure all drone users are properly equipped to pilot a drone and to make it easier to identify drones that may be used for illegal or criminal purposes. However, users queried the proposed fee assigned to the new registration system, as well as the appropriateness of the online test. The Committee believes that the registration system must be fit for purpose, and that its design should not stop users from registering.

The Committee also believes that the Government should not introduce any legislation that will unfairly impact upon the recreational drone and model flying community.

Vision for the future

The Committee recognises that drone technology is moving at a fast pace, carrying with it a multitude of opportunities and risks. With this in mind, the Committee calls for the Government to produce a comprehensive White Paper by Summer 2020, that sets out its plans to integrate drones into society. This should include:

The Government should also clarify penalties relating to improper drone use in the forthcoming ‘Drones Bill’. The Committee recommend the Government include explicit penalties for the following in the legislation:

The Government must also commit to research and innovation into the technological advances of drones and ensure that the airspace is fit for the integration of drones. This includes:

Rt Hon Norman Lamb MP, Chair of the Science and Technology Committee, said: “Drones are an exciting technology that present the UK economy and society more generally with considerable benefits and opportunities. However, it is vital that the Government gets ahead of the curve in ensuring that drones are safely integrated into society, investing in the relevant research and technology that will create a safe airspace, if we are to fully realise these benefits in the UK. The Government must set out a clear vision that outlines the steps that it and other agencies will take to achieve a future vision and we hope to see a White Paper no later than Summer 2020.

“We know there are risks. As such, a Drones Bill must be introduced to Parliament next month. It must address the various risks—from weaponisation to the invasion of privacy—posed by drones. While legislation will not solve all the problems posed by drones, including nefarious drone users, it is an important step forward in making our airspace safer. The Government must recognise the extent of societal change that drone technology can bring about and launch a public awareness campaign that presents a realistic picture of the opportunities and risks posed by drones.”

Please send any comments to membership@arpas.uk